11.09.2017:- In its message to the High Level Segment of COP 13, Kenya,as the chair of the African region group noted that, drought was the most adverse climatic phenomena affecting the African region, and has resulted into declining land productivity, increased food insecurity, exacerbated poverty & unemployment levels, decreased Domestic Product, increased competition for natural resources, socio-economic disruptions and may compromise our efforts to achieve Land Degradation Neutrality. 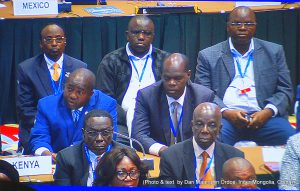 11.09.2017:- Kenya’s Mr. Richard Mwendandu, Director of Multilateral Env. Agreements, State Dept. of Env. and Chair of the African group of negotiators, flanked by  members of Kenya’s delegation to COP 13 (at the back) and Ghana (front), delivering a statement on behalf of Kenya, which is the chair of the African region group, during the High Level Segment of COP 13 in Ordos, China. 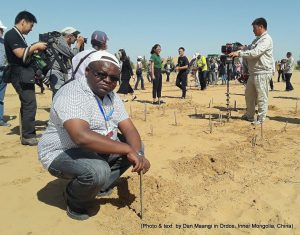 Delegates to COP 13, among them Mr. John Kioli from the Green Africa Foundation, taking part in tree planting at the Kubuqi  Desert, Inner Mongolia, China, during an excursion tour to view the Land degradation restoration programmes in the Desert. 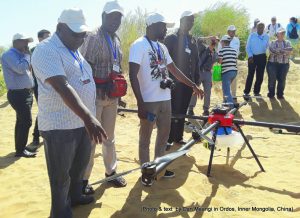 Delegates attending COP 13 in  Ordos, Inner Mongolia, China, among them Mr. John Kioli of the Green Aftica Foundation, during an excursion tour to the Kubuqi  Desert, viewing an unmanned aerial vehicle planting (drone),which is used to irrigate the planted seedlings using high pressure. The Desert is 100Kms from Ordos and 800Kms from Beijing city. 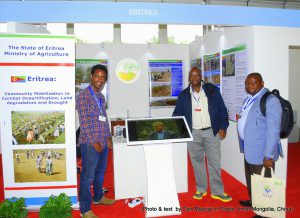 Dr. Kanga from the State Dept. of Nat. Res with Mr. John Kioli of Green Africa Foundation, at the exhibition stand of Eritrea at the Ordos International Convention Center in China. Eritrea, just like Kenya, is a member of the Horn of Africa Region, and it show-cased the various interventions the Government is putting in place to combat desertification. The other African Countries that are showcasing during the COP 13 here in Ordos alongside Eritrea are:- Namimbia and South Africa. 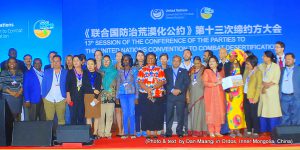 Members of the civil society attending the UNCCD COP 13 Conference on Desertification in Ordos, Inner Mongolia, China,among them Kenya’s John Kioli of  Green Africa Foundation, during the launch of the Land rights report  at the sidelines of the Conference.

Kenya’s Dr. , Ondimu from the MENR, flanked by Mr. Dan Kithinji from the Ministry, making a statement on behalf of the African region group in Ordos, China

Kenya was among the 196 countries that attended the thirteenth Session of the Conference of the Parties to the United Nations Convention to Combat Desertification (UNCCD COP 13) that opened in Ordos, Inner Mongolia, China.

The conference also attended by 20 international organizations, witnessed the handing over the COP presidency to Mr. Zhang Jianlong, Minister of State Forestry Administration, China, as the 13th President.

Mr. Zhang Jianlong urged the conference parties to urgently consider integrating the Sustainable Development Goal on Desertification in their development plans in order to achieve a Land Degradation-neutral world by 2030.

Equally, he called on the parties to consider the future strategic Framework of the Convention, Implementation of the comprehensive communication strategy, and the United Nations Decade for Deserts and the fight against Desertification.

He noted that COP 13 was a gathering of great minds to discuss ways to combat desertification and share experiences of controlling the spread of  deserts in the world.

The President also called on the delegates to ensure that, starting from Ordos, and in the course of combating desertification, they embark on a fight side by side and engage in a common Endeavour to pursue green development.

Addressing the same gathering, the Executive Secretary of the UNCCD, Monique Barbut observed that, substantial achievements have resulted from efforts made over the past years. She added that more was expected with the strategic framework to be formed at from Ordos’s conference.

The executive Secretary further expressed fears that, the window of opportunity created from aligning the Convention with the 2030 Agenda was limited against high expectations. This therefore required more effort at COP 13 and thereafter to enable refocus implementation and translating the Land Degradation Neutrality targets into action.

Baurbut further noted that, COP 13 needed to take decisions on issues that had not been dealt with, including drought and sand storms, gender, land tenure security, and acceleration of knowledge and strategic communication.

Kenya on behalf of the African region and in its capacity as chair of the African group of negotiators, in a statement read by Dr. Kennedy Ondimu, of the State Department of Environment, said the country was looking forward to the adoption of the future strategic framework, which will be a landmark of the conference.

This will enhance UNCCD’s role in contributing to the implementation of sustainable development goals and the Rio convention, in a synergetic and integrated manner Dr. Ondimu added.