The issue of water has taken center stage for the members of Thome Community Development Group in Thome village located in Laikipia West, Laikipia County.
The farmers who took over the maintenance of a furrow which they found flowing from River Narumoru felt that availability of reliable water would create more than 3,000 jobs especially to the young people and reduce dependency on relief food.
They constructed an intake which facilitated an easier flow of water which assisted them in farming, livestock rearing and beekeeping. As the membership of this projects increased, River Narumoru started behaving like seasonal river due to climate change and a higher demand of water for cultivation in the upper catchment area.
Through collaboration with various stakeholders such as Caritas Nyeri, Narumoru River Water Users Association, and Laikipia County Water Office, the group has found the necessary legal

documents to enable the members extract water from the river since the government had already banned the use of furrows.
It is by writing an application to Caritas Nyeri to assist in reviving the furrow that Thome Water Project changed to Kenya climate Change Adaptation Project which is part of a one billion Kenya climate change programme funded from the Adaptation Fund Kitty, which NEMA secured on behalf of Kenya. 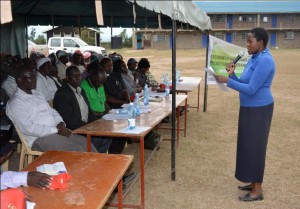 Chairman of Thome Community Development Group shared the journey that Thome community development group has travelled in dealing with among others insecurity, education, water, roads and other social needs.
Caritus Nyeri been the organization that submitted a proposal to NEMA on this project leading to its befitting success, act as the sub Executing Entity under Tarna River Development Authority. The organization therefore observed its inception workshop on 26th April 2016 marking the commencement of implementation of this programme.
During the launch Dr. Ann Omambia, on behalf of Director General NEMA, highlighted some of the key deliverables of the project that CARITAS will be implementing at Thome village. These includes, developing water structures and assets which will be achieved through flood rain water harvesting from R. Narumoru and transported using pipes then stored in water pans which will be distributed to the communities; Promoting drought resistant crop by distributing drought tolerant crop species and Mobilizing and organizing targeted communities into 20 groups out of the 400 targeted households through meetings; and Encouraging efficient water use-drips by providing about 200 Drip Kits complete with a 2000lts water storage tank (for 150m2).
She also emphasized that NEMA is proud of CARITAS Nyeri and its entire management, for the very important achievement and further looks forward to working together and with the communities of Thome village so as to deliver the aspirations of the Adaptation Fund, aspirations of NEMA as the NIE and more importantly, the aspirations of the targeted communities in this sub county.
Also gracing the occasion were representatives from Tana River Development Authority (TARDA) Hon. Abdul Bahari (chairman of Board of Directors TARDA) and Eng. Philip Langat.
In his speech Hon Abdul emphasized on TARDA’s commitment to ensure that all projects that are under it as one of the main Executing Entities of the Adaptation Fund programme are executed on time. He also said that Caritas Nyeri’s project in Thome village is set to end in two years’ time.